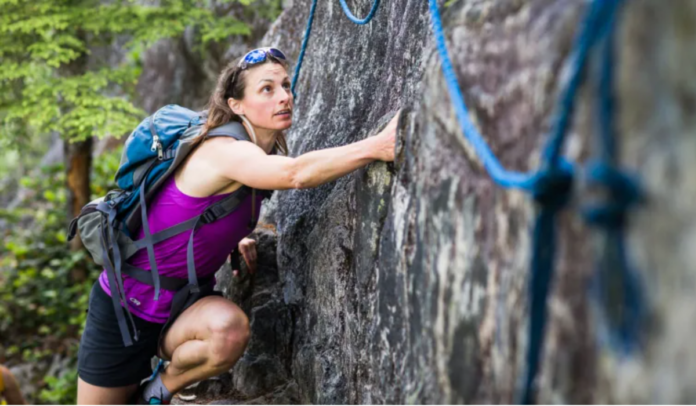 “Meaghan Buisson connects with courage”, her bio begins. “As a member of the Canadian inline speeds skating national team, Buisson was the first Canadian to compete professionally on the World Inline Cup Circuit. She is a 47-time Canadian national champion, a 16-time Canadian record holder, 11-time international medallist [sic], and the current world record holder in the solo marathon time trial.” You can read more about her on her website https://www.meaghanbuisson.com/, where she promotes her business as guide, speaker, and coach.

It might surprise you to learn that Buisson struggled with mental health issues throughout her career, going so far as seeking experimental treatments for relief. (1) On December 23, 2014, Meaghan Buisson enrolled in a clinical trial to test the effects of therapy-assisted MDMA treatments for treatment-resistant PTSD – PTSD related to the sexual abuse Buisson suffered as a child. (1)(2)

Over time, Buisson became close with her therapists for the study, Richard Yensen, Ph.D., and Dr. Donna Dryer, a husband and wife. Yensen had let his professional license lapse, but the Multidisciplinary Association for Psychedelic Studies (MAPS) study only required one licensed psychologist per two-person team. According to a Quartz article, Meaghan Buisson moved to Cortes island off the coast of British Columbia in June of 2015 to be closer to the pair, six months after her third and last MDMA session, but while she was still a participant in the study. (3) In October 16 of 2016 Buisson seems ecstatic about the treatment, stating in an article she wrote for MAPS(4): “As the sun sinks behind the mountains, a chorus of wolves echoes the haunting cries of loons. On an island cradled by the northern Salish Sea, I am miles from where I ever thought I’d be. I am also – incredibly – home.” She also gives us an insight into the type of therapy she was receiving while under the influence of MDMA:

“When the tears finally came, they spread like bullet wounds across my therapist’s chest. There were two with me at all times. Hugging me often. Holding me as I cried. Providing the touch I craved as much as feared. Denied yet ached for, with the longing of a child unsure of what was safe.”

“Therapeutic breakthroughs occur on the edge of consent. They pushed me hard, my toes curling in protest. But each time I fell they were there. Holding my fragments together until the wounds mended enough to carry on.”

Buisson continued to be under the care of Yensen and Dr. Dryer until 2017. By November 28 of 2018, Buisson had a vastly different view of her treatment. She filed a civil suit against both of her therapists. In the suit, they are accused of the following (4):

Yensen does not deny having sex with Buisson, but according to an article at www.cbc.ca, he “accuses her of initiating it, describing her as ‘a skilled manipulator.'” In Yansen’s view, he and Buisson were fellow participants in a study — because he was unlicensed, and therefore restrictions that British Columbia has against relations with patients did not apply to him.

For her part, Dr. Dryer knew her husband was engaged in a sexual relationship with Buisson but did not report it to MAPS. MAPS has given Buisson $15,000 for therapy but denies culpability. They released a statement on May 24, 2019, which says, “MAPS has policies in place that forbid sexual relationships between therapists and patients. There was no prior indication that Richard Yensen or Donna Dryer would violate this policy”. (2)

Sexual abuse has existed in the field of psychedelic studies since the 1980’s, before such studies were banned. As psychedelic treatments become available, Buisson warns, “this is not a safe situation. What that does for patients is it puts us in a position of responsibility for our own care”. (6)

In June of 2016, while Buisson was under their care at Cortes island, the husband and wife duo gave a talk for the California Institute of Integral Studies (CIIS), titled ‘Cautionary Tales: MDMA & MDA in Psychotherapy — A Talk with Richard Yensen and Donna Dryer’. Yensen and Dr. Dryer share their brushes with sexual coercion:

Yensen: “There was another subject in that study, a lovely young lady who became very sexualized in her relationship around the sessions. It got so intense I remember the chairman of our department had walked by and saw her sitting with me, talking with me, and he picked up on the energy she was putting out and he said ‘Richard, come here.’ You know, I’m 20 years old. [He] said ‘you know gynecologists, they always have a co-therapist with them. They always have a nurse in the room whenever they examine somebody. I want you to make sure that you always have somebody with you when you’re with this patient.’ Thank god because she became more and more and more activated sexually, and was able to work it through, and was able to get through the process of therapy and get well, but it was — I don’t think I could have handled it. I really don’t think I could’ve as a young therapist”. (8)

Dryer: “I remember once, there was a person who was starting to work with both of us and she decided that she wanted to be with Richard [Yensen], and we hadn’t gotten together, we hadn’t gotten married yet but we were definitely together, and she decided, and I didn’t know this, she kept that from me, but she offered to give me an MDMA session. So in that MDMA session she had me say goodbye to Richard and go through the process of letting go of him and, you know, sending him off. And I cried and sobbed and at the end of it I thought, I didn’t want to do that. And so you know there are abuses that I’m sure can happen because people become so vulnerable and your judgement is so completely not there… The question becomes what kinds of sets do we need to have, and what kinds of sets do our patients, subjects, clients, need to have and what kind of settings in order to help make sure that people who are completely vulnerable — like really dependent kids — again, what kind of settings can we create that would make sure that people really heal in those instead of being re-traumatized?”

Dr. Dryer and Richard Yensen continue to practice on Cortes Island. More information can be found at https://heartoftheshaman.ca/