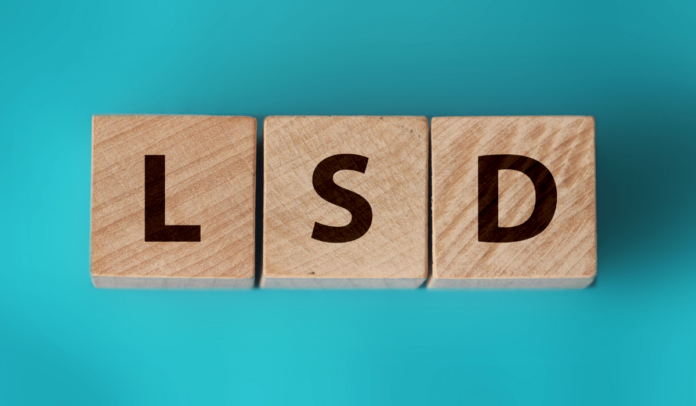 LSD has been around for decades, but its status as a Schedule I drug has contributed to the unavailability of sufficient research. As a result, researchers haven’t definitively concluded how it affects the human brain.

However, based on the research available currently, LSD has not displayed any signs of damaging or destroying brain cells. But this does not mean it doesn’t distort your brain when it’s ‘high’ hits hard.

We do not support any illegal drug use. However, we believe it is our duty, as a credible source of information, to provide our readers and possible users with content that can help mitigate the damages that we see occurring every day. We strongly advocate for safety first!

What short-term brain effects does LSD have?

LSD is a powerful psychedelic drug that influences a receptor in the brain known as serotonin, responsible for an assortment of things in our body. First, it stabilizes our moods and fills us with a feeling of well-being and happiness. Second, it facilitates cell communication throughout the body. Serotonin also helps promote better digestion, sleeping, and eating.

A 2016 study revealed that LSD alters the flow of blood and electrical activity in the brain. It also showed that LSD stimulates the brain and multiplies the areas of communication.

When these effects are combined, they cause;

LSD’s effects can be felt within 20 to 90 minutes of consumption and last for up to 12 hours. The time it takes the effects to set in, and how long they last depends on many factors, including the user’s personality and moods, consumption frequency, dosage, and the set and setting.

What long-term brain effects does LSD have?

As it stands, the research on the long-term effects of LSD is almost non-existent. We know that regular use of LSD leads to a tolerance built-up, which requires the user to consume a larger dose than usual to achieve the same results over time.

When the user stops using the LSD, the tolerance resolves itself after some time.

Psychosis involves the alteration of the normal state of mind. A user will experience a distorted sense of self resulting from a disruption of the flow of thoughts and perception. Psychosis makes it hard for the user to differentiate reality from hallucinations. They tend to believe that their hallucination of objects and sounds is real.

There are numerous stories associated with a bad psychedelic trip, including one that claims that it causes permanent damage to one’s mental state and personality. We have heard it too! But the question is, how founded are these claims?

It turns out that it does happen, but the chances are too slim. However, for people who have pre-existing or have a genetic predisposition to psychosis, LSD can trigger the condition or make it worse.

A 2015 survey indicated no relationship between psychedelics and psychosis unless factors like existing mental conditions and several other risk factors are considered.

HPPD is a condition whereby a current or former drug user experiences numerous flashbacks that makes them feel like they are re-experiencing their psychedelic trip. The flashbacks are sometimes inclusive of visual, tactile, and sound effects from the trip.

In some cases, flashbacks are welcomed as they provide the user with a pleasant feeling that keeps them alert and euphoric. Other times, the flashbacks become a nuisance that disrupts an individual’s daily activities, especially the visual effects.

For most people, the LSD-related flashbacks can occur less than three times within a few days of use. However, they can also appear anytime, even years later after consumption.

The flashbacks associated with HPPD frequently occur within a short span. Still, it is hard to make a conclusive generalization considering that most patients are very timid when sharing information about drug use with their doctors.

Although the cause of HPPD is still unknown, having these conditions or sharing genes with anyone with them puts you at a higher risk;

Experiencing a bad trip has nothing to do with HPPD, regardless of the common belief. There is no evidence to back up the claims. There have been numerous people who have has bad trips associated with LSD that never ended with the acquiring of HPPD.\

Will LSD make you ‘permafried?’

Though not a medical term, permafried refers to a decades’ old myth that claims that LSD can trigger permanent damage of the brain or put a user on a psychedelic trip that never ends.

This claim stems from the stories we talked about earlier. According to another story, some people use LSD and change completely.

According to serious studies and research conducted on the effects of LSD, the permafried effect is a myth that bears no scientific back-up.

Can LSD repair parts of the brain?

An animal in vitro study conducted recently concluded that small doses of LSD and several other psychedelic drugs could change the brain cells’ structure and contribute to neuron growth.

This discovery is beneficial to individuals who experience mood fluctuations and anxiety; their conditions are characterized by shrinking the neurons located on the brain’s prefrontal cortex.

By promoting the growth of the neurons, LSD helps curb anxiety and other mental conditions. But this will only be possible IF the studies can involve humans.

This article has demonstrated the opposite of what the myths and urban legends have to say about LSD; instead of destroying brain cells, it turns out that it MIGHT be beneficial in their growth. Once the results are replicated in humans, this could be the answer to fixing a number of mental conditions by supporting neuron growth.

Benefits aside, it is prudent to take caution whenever you interact with any psychedelic drug, especially if you have an existing mental condition or are at risk of psychosis.